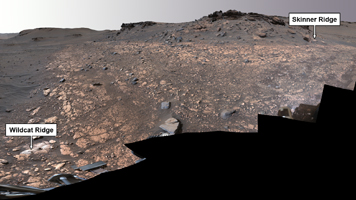 This image shows two locations in Mars's Jezero Crater where NASA's Perseverance rover collected rock samples for possible return to Earth in the future: "Wildcat Ridge" (lower left) and "Skinner Ridge" (upper right). These two outcrops are within about 70 feet (20 meters) of each other. The rover cored two cylinders of rock the size of classroom chalk (about 0.5 inches, or 13 millimeters, in diameter and 2.4 inches, or 60 millimeters, long) from each location.

The two sites are in the delta, a fan-shaped area where, billions of years ago, a river once flowed into a lake in Jezero Crater and deposited rocks and sediment. Scientists consider the sedimentary rocks preserved in the delta one of the best places on Mars to search for potential signs of ancient microbial life. The verification of ancient life on Mars carries an enormous burden of proof.

Figure A, an annotated version of the image, indicates the locations of Wildcat Ridge and Skinner Ridge.

A light-colored, circular patch of abraded rock can be seen in the lower-left corner of the image, next to areas where Perseverance used its drill to extract the rock-core samples. The abrasion patch to the right of one of the holes is about 2 inches (5 centimeters) in diameter. The samples taken from these areas were sealed inside ultra-clean sample tubes, which are currently stored inside Perseverance.

The multiple images that make up this mosaic were acquired by Perseverance's Mastcam-Z instrument on Aug. 4, 2022, the 518st Martian day, or sol, of the rover's mission. The color bands of the image have been processed to improve visual contrast and accentuate color differences.

NASA's Jet Propulsion Laboratory, which is managed for the agency by Caltech in Pasadena, California, built and manages operations of the Perseverance rover. Arizona State University leads the operations of the Mastcam-Z instrument, working in collaboration with Malin Space Science Systems in San Diego, on the design, fabrication, testing, and operation of the cameras, and in collaboration with the Neils Bohr Institute of the University of Copenhagen on the design, fabrication, and testing of the calibration targets.

For more about the Mars Sample Return campaign: mars.nasa.gov/msr

PIA25333: JunoCam Images of Europa, Before and After