PIA24923: Perseverance Exploring the Front of the Delta 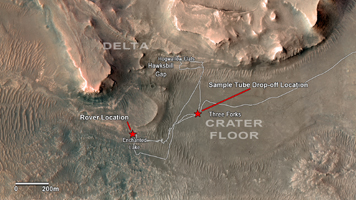 NASA's Perseverance rover has been investigating rocks at the front of the delta in Mars' Jezero Crater along the path indicated in this annotated image taken by the agency's Mars Reconnaissance Orbiter (MRO). The red star indicates the location of the rover in September 2022.

Perseverance touched down at "Octavia E. Butler Landing" on the floor of Jezero Crater on Feb. 18, 2021. It reached the delta in April 2022. The delta is a fan-shaped feature where, billions of years ago, a river flowed into a lake and deposited rocks and sediments. Scientists consider the delta one of the best places on Mars to search for potential signs of ancient microbial life.

The annotations show the names of some of the key features Perseverance visited, such as "Enchanted Lake" and "Hogwallow Flats."

Figure A additionally shows a potential location where the rover could deposit a group of sample tubes for future return to Earth. Sample tubes already filled with rock are currently stored in the rover's Sampling and Caching System. Perseverance will deposit select samples in designated locations.

NASA's Jet Propulsion Laboratory, which is managed for the agency by Caltech in Pasadena, California, built and manages operations of the Perseverance rover.

JPL manages MRO for NASA's Science Mission Directorate in Washington. The University of Arizona, in Tucson, operates HiRISE, which was built by Ball Aerospace & Technologies Corp., in Boulder, Colorado.